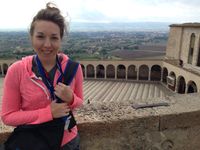 Miriam Marston is a singer-songwriter and speaker based in Portland, OR. She's a fan of: Tolkien, C.S. Lewis, soccer, the ocean, Dr. Who, train travel and Pad Thai. All of these things show up in her lyrics, with the exception of the Pad Thai. Some of her earliest musical memories come from long family car rides, during which the same three cassette tapes were played over and over: the soundtracks to Jurassic Park and Robin Hood: Prince of Thieves, as well as an Enya album.

She wants to write songs which help tell the stories that need telling. That includes your stories, so drop her a line, if you'd like.

"Faced with the sacredness of life and the human person, and before the marvels of the universe, wonder is the only appropriate attitude." Pope St. John Paul II, "Letter to Artists"