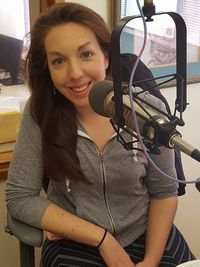 SPRING 2020: Miriam presented a Retreat for the Newly-Cloistered. Check it out HERE and stay tuned for future virtual retreat opportunities.

AUTUMN 2015: Miriam has released her second book, "The Memory of Good: Meditations on Conversion and Gratitude." Find it here on Amazon.

JULY 2015: It was time to take the music on the road! Miriam joined Joelle and Nichlas Schaal once again, this time, for a concert in Eugene, OR. Thank you to all who attended the event at St. Mary's Church!

MARCH 2015: Miriam joined Joelle and Nichlas Schaal for their concert on March 7, 2015 at Resurrection Parish in Tualatin, OR. She performed her original song, "The Gardener".

JANUARY 2015: "What I Learned in Oxford" is now available on Amazon! Click here to purchase! This book is best enjoyed with a cup of English Breakfast tea and a few biscuits.
* * *
Click on the text to access previous interviews and features...

Featured on "Strange Notions", an online place of dialogue for Catholics and atheists (June 2013)